A screenshot of the Guardian coverage of Friday’s Great Return March, where Israel killed 15 Palestinians.

“If you are neutral in situations of injustice, you have chosen the side of the oppressor,” archbishop Desmond Tutu, one of South Africa’s most prominent anti-apartheid activists, once said. The Guardian is not even pretending to be ‘neutral’. My analysis highlights the problems within the Guardian‘s coverage, exposes its bias towards Israel, and its serious implications.

The article above lays justifications for Israel and presents Palestinians’ casualties with suspicion. It reads as if written by an Israeli propagandist desperately trying to reduce legitimate resistance to colonial oppression as a ‘Hamas ploy’ in an attempt to whitewash Israeli crimes.

Dubbing Palestinian popular resistance as ‘Hamas ploy’, as described by Israeli officials and repeated widely amongst western media, strips Palestinians of their agency, and downplays the Israeli-imposed dehumanising situation we are subjected to. These demonstrations saw no equivalence in Gaza for a while, whether in terms of public engagement magnitude or generational and gender diversity. All united behind the flag of Palestine.

Slamming Friday’s protests as a ‘Hamas ploy’ is not an exceptional practice. It serves the demonisation of Palestinian resistance, an ideological weapon designed to keep Israel immune of criticism. Israel’s ‘self-defence’ rhetoric, which is predicated on the strategy of blaming the victim and demonising their resistance, serves to deflect attention from the slaughter of Palestinians by Israel.

Land Day’s popular resistance is not coming out of the blue. History teaches us that whenever there was oppression, there was resistance. Palestinians exercised their right to resist, guaranteed by International Law.

Resistance as a natural to colonial power

Various Zionist leaders acknowledged resistance as a natural reaction to colonial power. In 1956, Israeli army Chief of Staff Moshe Dayan noted in his eulogy at the funeral of an Israeli security officer ambushed by Fedayeen (“freedom fighters”) from Gaza:

“Let us not today fling accusations at the murderers. What cause have we to complain about their fierce hatred for us? For eight years now, they sit in their refugee camps in Gaza while before their eyes we turn into our homestead the land and villages in which they and their forefathers have lived. We should demand his blood not from the Arabs but from ourselves.”

Even the godfather of the rightist Likud Party mostly in power since 1977, Ze’ev Jabotinsky, conceded in 1923: “Every indigenous people… will resist an alien settler.” Thus, he concluded, “a voluntary agreement (with Arabs) is just not possible”, and “the sole way to such an agreement is through the iron wall”, his metaphor for force or military might. Israeli politics of subjugation against Palestinians have largely followed the iron-wall instructions since, up to and including Israel’s lethal force against Land Day protestors.

The Guardian article is problematic in several ways. Take this photo, for example. So many heartbreaking and inspiring pictures came from Gaza protests, reflecting a dynamic multigenerational mixed-gendered protestors. Their choice came in line with a longstanding colonialist representation of Palestinians as dangerous, irrational and violent, and Gaza being “a combat zone” or “enemy entity“. How about a picture from the viewpoint of Israeli snipers shooting live bullets at thousands of defenceless protestors facing one of the world’s mightiest armies with their bodies? That would endanger Israel’s public image however, and would probably put the UK government in an impasse to justify its support of Israel, including its arms trade with Israel which might have led to the killing of 15 Palestinians on Friday and the wounding of hundreds.

The title is another story. Let alone putting the Israeli official line as a sub-title, thus validating it. “Palestinians say”? Can it be more passive and suspicious? Why attribute the report, not the truth? “Palestinians say” presents those facts with suspicion. And why avoid mentioning the perpetrator of these killings? That happened before the eyes of the whole world, and the IDF admitted it. It’s all documented and people saw it happening online through live streaming! What if it was the other way around? Would the Guardian or the BBC dare to frame “Israeli officials say 15 Israelis were killed” as a title? And without mentioning the perpetrator and slamming them as terrorists?

The problematic aspects of this coverage doesn’t stop here. “The protests coincided with the start of the Jewish Passover, when Israel security forces are normally on high alert,” the Guardian reported. These religious connotations are just wrong. As I said in my article published earlier, Land Day is one of the most significant days in Palestinians’ political history. Adding religious connotations distorts the deeply political context behind these protests. Land Day is purely about our inalienable political rights. The right to freedom, justice, equality and return which have been denied since 1917, when Britain, as the colonial power in Palestine, sold its indigenous people’s right to self-determination to the Zionist settler-colonial project in a notorious letter known as the Balfour Declaration.

Israeli and Palestinian human rights organisations called Israeli use of ‘lethal force’ against Palestinian protests a crime. B’Tselem from Israel warned against framing demonstration areas as “combat zones” and against the use of “shoot-to-kill” policy at demonstrators. On Friday evening, B’Tselem stated,

“Armed soldiers and unarmed demonstrators are not “at war.” The illegal open fire regulations and the compliance with them are the reason for the number of dead and injured today in the Gaza Strip.” 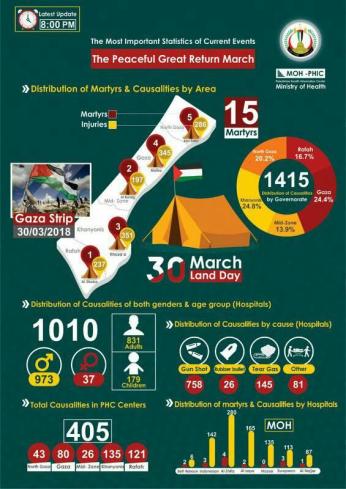 Such coverage ignores all these troubling details, including the fact that it is a clear case of injustice defined by an occupier against occupied, NOT equal sides. The Guardian used the word ‘clashes’, which presumes a tit-for-tat between two equal sides, to describe armed soldiers against thousands protesting with bare chests, four times. This is called word laundering, a technique commonly used by Israeli political leaders, news editors, and most mainstream Western media to downplay Israeli crimes and avoid harming Israel’s image.

15 unarmed young Palestinians were killed brutally and unjustifiably and hundreds were injured. Amongst them is A 15-year-old cousin who was shot in his leg, and a 25-year-old neighbor who got shot dead. Don’t kill our victims twice.