Women Revolt: Between Media Resistance and the Reinforcement of Oppressive Gender Structures

Below is the abstract of an academic article I published at Kohl Journal. To read the article in full, press here.

Abstract: After a video accidently caught a sexual harassment incident I was subjected to at the Rafah border, my body became the ground upon which the most hegemonic ideological powers operating in Gaza fought for dominance. The video pushed me and my personhood to the margins under the rubric of my “protection” as a woman, an issue that is perceived by the general community as “common sense.” The media discourse that surrounded the incident demonstrates women’s multiple struggles in the Palestinian community and the central role that media and power structures play in defining and reinforcing certain hegemonic discourses, such as patriarchy. However, women have performed uncountable examples of implicit and explicit resistance to reclaim their agency in the face of oppression and patriarchy. In my case, social media tools allowed me to reclaim the original context of the event and expose the patriarchal cultural traditions that reduces women to their bodies and restricts and marginalises them. It also succeeded in paving the ground for more open discussion around the violations the women are subjected to on a daily basis in public and private spheres, and challenged the cultural taboo around sexual violence against women. 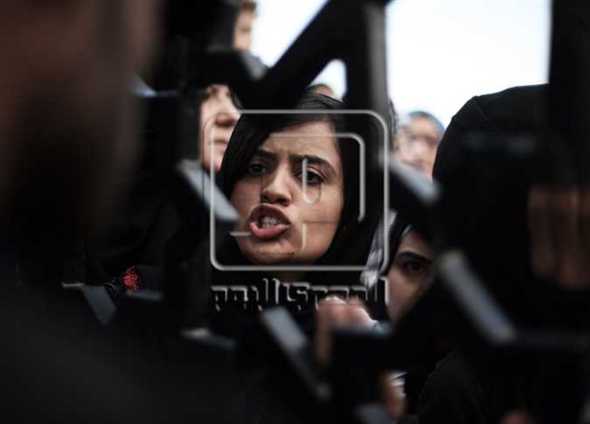 This picture features me behind Rafah Border Crossing, protesting against its closure on 29 September 2013