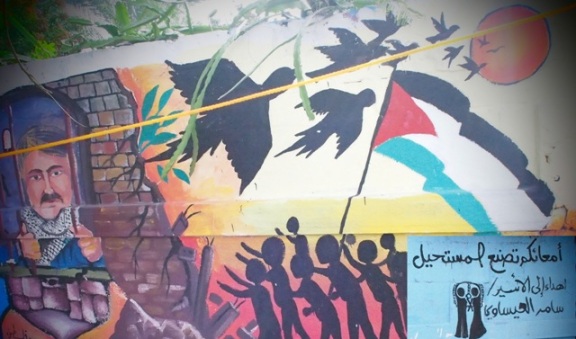 A mural in solidarity with Palestinian hunger strikers has been painted opposite a protest tent at the International Committee of the Red Cross offices in Gaza.

Ayman Shrawna has suspended his 178-day hunger strike for ten days, as he has been promised by the Israeli Prison Service (IPS) that it would review his case and release him by the beginning of next year. He is allowing himself to have only fluids, but has threatened to continue his strike if the IPS fails to fulfill its promises. This leaves Samer Issawi alone in this battle of empty stomachs, continuing his historic hunger strike that has lasted for 183 days.

While surfing on Facebook this week, I saw a video my best friend Loai Odeh had shared of the attack on Samer Issawi in an Israeli court. It made me feel sick and angry, but not shocked.

“Your humanity and determination is always stronger than their brutality and savagery,” Loai wrote to his friend Samer, whom he grew up with in Jerusalem, and with whom he shared a cell in Israeli jails and was released in the prisoner exchange deal last year. Loai had first thought that Samer was luckier than him to be able return to Jerusalem. By contrast, Loai was expelled to the Gaza Strip from his hometown, where every corner guards his and Samer’s precious childhood memories.

“I know how stubborn he is,” Loai told me when Samer was kidnapped by Israeli forces on 7 July and declared an open hunger strike to protest his re-arrest. “He will not break this hunger strike until he is set free, even if it costs him his life.”

Loai spoke beautifully to me about Samer many times, which made me feel spiritually close to him. “Samer is stronger than all these hardships.” Loai keeps repeating these words over and over again as he counts the days of Samer’s mounting hunger strike.

I remember when Loai called me last Sunday, December 16, saying that it was Samer’s birthday. “He is celebrating his birthday in hunger, in a cold dark cell,” he said after a few seconds of silence that interrupted our call.

“Keep being free,” Loai wrote as a birthday greeting to Samer. “Keep your head held high over their barbed wires and racist walls. You shall be among us, my comrade.”

Despite the grave conditions Samer suffered on his birthday and still suffers, he and all the Palestinian people still have something to celebrate: his indestructible will. He is armed with a determination that makes physical necessities like food meaningless. This steadfastness is more harmful to the Israeli military than any weapon. It drove them to attack him and his family, and to destroy sit-in tents erected in solidarity with him in Jerusalem, especially in his home village, Issawiyeh. We are all proud of Samer, who reminds us that our cause is just. 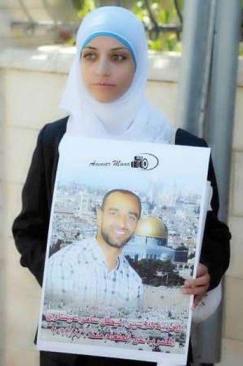 A photo posted on the Facebook page of Shireen, Samer Issawi’s sister.

As I read Facebook status updatesby Shireen, Samer Issawi’s sister, her simple but powerful words moved me so much that I burst into tears. She vividly narrated how Samer and her family were attacked three days ago in the Israeli court, which she described as “racist.”

“Seven Israeli occupation soldiers savagely attacked Samer, ignoring his critical health condition and the fact that he was shackled to his wheelchair,” she wrote.

His family saw this brutality against Samer, and tried to protect him and prevent soldiers from beating him, but were dragged outside the court. Shireen wrote that the judge of the court was also there, watching idly. Instead of trying to do anything to end this brutality against a sick, shackled prisoner lingering at the edge of death, he ran out of the court. This judge and the IPS should be held accountable for their crimes against humanity.

Yesterday morning, I heard Samer’s mother speaking to Palestine Today TV live by telephone. She described how she saw her dying son being beaten. “All he did was try to shake hands with me,” she said. “This might have been the last chance for us to see, touch, or say goodbye to each other.” Her shaking, sorrowful tone still echoes in my ears.

She also described how Israeli soldiers raided their house in Jerusalem the same day, broke into Shireen’s room, and kidnapped her. Shireen has done nothing but try to give a voice to her brother. She has worked very hard organizing solidarity hunger strikes and protests. She has spoken to human rights organizations and international media, calling on people around the world to support her brother. But she is a threat to Israel because she is a strong voice of truth.

One of Shireen’s status updates reflected how she felt during the day she spent in an Israeli cell. “When they pushed me into that narrow, horribly dirty and cold isolation cell, I felt more spiritually united with my brother Samer,” she said. “I can’t put into words how proud I felt that my brother Samer can endure these hardships. He is a legend, as he remains resolved to continue his hunger strike despite all the difficult and painful circumstances he has endured.”

This cold weather makes the hunger strike a lot more difficult. The colder it gets, the more food the hunger striker needs. All our Palestinian political detainees suffer as the IPS refuses to supply them with winter clothes, sheets, and shoes, in attempt to break their will. Israel will never succeed. No matter how and to what extent the IPS oppresses our heroes, they will remain strong and defiant.

In Gaza, we have set up a  tent  to express solidarity with Samer Issawi, Ayman Shawana and all Palestinian political prisoners. Groups of people from different generations keep coming back and forth to the tent expressing their solidarity in different ways. Yesterday, I attended a poetry reading organized by the Islamic University of Gaza, featuring the Egyptian poet Hesham El-Jakh. I could see a group of students holding Samer Issawi’s posters while waving the Palestinian flags. Observing how our heroes inside Israeli jails unite the Palestinian people everywhere makes me proud and happy.

Don’t hesitate to do anything you can in support of Palestinian hunger strikers. Your silence gives the IPS impunity to continue its cruelty against our detainees, violating international humanitarian law. Your silence can lead to the killing of our heroes. Act now to end our hunger strikers’ suffering. We want our hero Samer Issawi to stay alive.