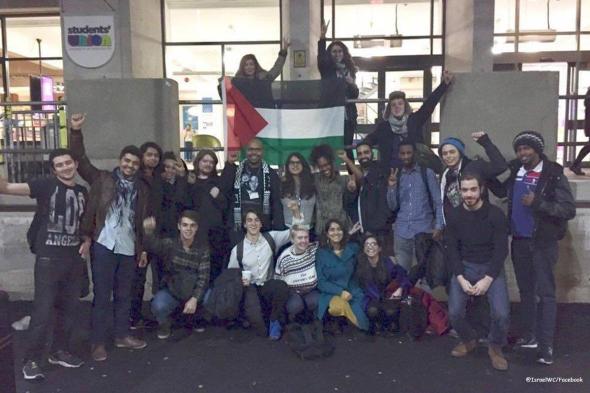 Student representatives at the University of Manchester have voted to back the Palestinian call for boycott, divestment and sanctions (BDS) against Israel.

A motion in favor of BDS was approved by 60 percent of the student union senate at the British university last week.

The decision is a bold challenge to the university’s administrators who have developed strong links with Israel in recent years.

In 2013, the University of Manchester signed a cooperation pact with the Technion, Israel’s technology institute.

The Technion works in partnership with a number of Israel’s arms manufacturers and has even helped develop a remote-controlled function for the D9 bulldozers that Israel uses to demolish Palestinian homes.

The BDS motion also demands that the University of Manchester sells nearly £15 million ($19 million) worth of shares in corporations linked to Israel’s oppression of the Palestinians. These corporations include Caterpillar, maker of the D9 bulldozer.

The vote is the result of a long campaign by Palestine solidarity activists in Manchester, who insisted that their tuition fees must not be used to support institutions complicit in Israel’s crimes.

The BDS motion was approved following a poignant speech by Huda Ammori, a British-Palestinian student, who chairs the Recognise Refugee Rights society in the university. She referred to how her own father had to leave Palestine when he was just 6 years old. His family’s home in the Tulkarem area of the West Bank came under attack by Israeli forces in 1967.

“My father was forced out of his house in Palestine,” Ammori said. “The Israeli military shot at him and his siblings. He had to hide under the table, hoping to survive. They ran from the back of their house barefoot and had to hide in caves without any means of survival.

“BDS is necessary to strip Israel of its impunity,” she added. “It is necessary to ensure that Palestinians regain their most fundamental human and political rights: freedom, justice, equality and return.”

The vote is particularly significant as the University of Manchester has strong historical links to the Zionist movement. Chaim Weizmann, the Zionist movement’s top lobbyist in Britain during the first half of the 20th century, worked as a scientist in the university. He went on to become Israel’s first president.

Today’s Zionist lobby is dedicating much energy to try and counter the BDS movement. The pro-Israel lobby tries to portray the BDS movement as motivated by anti-Semitism, despite how the movement explicitly condemns all forms of racial and religious bigotry.

Some opponents of the BDS motion in Manchester alleged that it made Jewish students feel unsafe. Ammori stressed, however, that growing numbers of Jews are insisting that Palestinians be granted justice and equality.

“This support is growing because they understand that it has nothing to do with Jewishness but with the Zionist oppressive colonial ideology that enables Israel’s ongoing oppression against Palestinians,” Ammori told The Electronic Intifada.

The BDS work will have to be sustained in the University of Manchester, even if demanding respect for Palestinian rights would appear to be in line with the college’s official commitment to “social responsibility.”

“It’s a great victory but this is only the beginning,” Etisha Choudhury, chair of the Action Palestine society in the university, said. “We are going to celebrate it but also work harder to be stronger and more effective in order to bring about more victories. We still have a massive journey ahead. We will continue until the university divests and cuts ties with the Technion.”

Palestine solidarity activists expect that they will encounter attempts to prevent the BDS motion from being enforced, despite how it was endorsed in a democratic vote. One fear is that the university’s administration will use the argument that cutting its links with Israel will cause “reputational damage.”

Ammori contended that the university would suffer worse damage to its reputation if it kept doing business with the Technion.

“They [the university’s administrators] claim to be socially responsible,” she said. “This is impossible given their association with the Technion, the weapons laboratory of the Israeli military.”