Protesting Israel’s Dehumanization and Demonization of the Palestinians 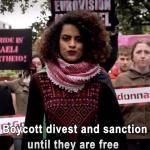 I recently came under attack by Zionist groups and publications, including the Jewish Chronicle and UK Zionist Federation. Those attacks were routed through my university, Sheffield Hallam, as part of an organized attack on the Palestinian-led movement for Boycott, Divestment, and Sanctions of Israel, especially in England and Germany. Its purpose is to silence the rights-based movement that has succeeded in threatening Israel’s culture of impunity. It aims to undermine BDS activists’ credibility and in my case, smear my academic reputation.

These attacks came after starring in a couple of videos, Cultural Boycott and Madonna Don’t Go, which London Palestine Action made to advocate for the Palestinian call to boycott Eurovision on the basis of its “art-washing” of Israeli crimes against the Palestinian people.

I wrote about this in length on Jadaliyya. Please read and share wide in solidarity with Palestinian and solidarity activists whose are facing an increasing hostility from Zionist lobbies for daring to protest Israeli longstanding and systematic dehumanisation of Palestinians.

Enjoy the videos below, and support BDS in solidarity with the Palestinian people.

Watch and share and see if you can spot me :) let’s get it as viral as possible! #BoycottEurovision #SayNo2ArtwashingApartheid #BDS https://t.co/hWvpm9xi3w

My Speech for London Rally in Support of Palestinians’ Rights to Exist, Resist and Return

During a #StopArmingIsrael protest during a week of action against DSEI arms fair in September 2017. Photo by David Dinis Photography

My name is Shahd Abusalama and I’m a 3rdgeneration Palestinian refugee, born and raised in Jabalia Refugee Camp, northern Gaza. I’m standing here with so many Palestinians, born in Palestine and exile, to tell the founding Zionists of Israel who assumed that the old will die and the young will forget, that we will not forget Palestine, and we will never surrender our fundamental rights to exist, resist and return. We stand representative of many indigenous communities who faced various forms of oppression across the history of European colonialism and imperialism, to remind the world that settler colonialism is not a culture of the past, but a current reality that we have lived and defied from America, Australia and Ireland to Palestine.

My grandmother described a peaceful childhood in green fields of citrus and olive trees in our village Beit-Jirja. This life, the tastes, the sounds and the smells remained fixated only in her memories as Beit Jirja was dismantled alongside other 530 villages and towns that were depopulated and destroyed by Zionist thugs in 1948. For Palestinians, the Nakba was never a one-off event that happened in 1948. Israeli colonial oppression has never stopped and many Palestinian communities within Israel, including the people of Khan Al-Ahmar, are still fighting against their ethnic cleansing as we stand here.

My grandparents are present today more than ever as we mark the 71stanniversary of the ethnic cleansing of Palestine, for what happened then is why I was born in Jabalia with a gun pointed at my head. During my mother’s labour, Israeli soldiers disrupted her way to Jabalia UNRWA Clinic as they forced a curfew that indoctrinated to shoot any moving being. Shooting to kill was common in the 1st Intifada when I came to life, and is a common practice now.

We saw it in the shooting and maiming of Gaza’s Great Return March protestors who stood with their bare chests against Israeli snipers to claim their humanity and to bring their right of return, an issue that Israel firmly rejected across the past 7 decades on racist grounds, to the centre of political debate.  Their cries for justice come amidst US-Israeli attempts to push the right of return and Jerusalem “off the table”. It is time that we call those world leaders what they are: racist trolls. It is time to stand firm in our support of the Palestinian right of return, as without justice, there will be no meaningful peace.

Palestinians in the Gaza Strip just survived another a 3-day deadly Israeli attack last weekend, which claimed 25 lives, including two pregnant women, two toddlers and a 12 year old child. While world news was quick to move on after the truce was announced, Palestinians in the Gaza Strip returned to a daily struggle for survival while more deadly violence is expected at any moment. That’s how my family welcomed Ramadan. Following the truce, I heard my parents calling relatives and friends and saying, “glad you survived” before continuing “Ramadan Kareem”.

Imagine living in an open-air prison where there is constant presence of death, and fear of walls falling inwards. This fear of being uncertain about anything, including your own life, even while in your home, is terrifying. This is what 2 million people faced last weekend as they are besieged by Israeli weaponry from air, land and sea, turning Gaza into a laboratory for its lethal arms, which Israel markets as ‘battle-tested’ in notorious arms fairs around the world, such as DSEI which London is hosting again this year.

It is not a coincidence that Gaza comes under attack during Israeli elections over and over again. Those elections are led by criminals using Palestinian children’s blood to win popular support. Meanwhile, the world is about to celebrate Eurovision in Israeli Apartheid on top of an ethnically-cleansed Palestinian land, a show whose whole purpose is to expose Israel’s ‘prettier face’ while deflecting global attention from its daily crimes against the Palestinians. Shame on all contestant countries, all the participants and audiences if they still support Eurovision in Israel while our victims’ blood haven’t dried.

This is nothing new. This is our decades-long lived experience that is normalised by a dominant media discourse that finds it comfortable to avoid addressing the power imbalance between the occupier and the occupied, to remove the context of settler colonialism and reduce it to conflict, effectively demonizing Palestinians and their legitimate struggle against their systematic dehumanization. Our injustice is also normalized by tax payers whose money is paid as military ‘aid’ for Israel, by politicians who suddenly fall short on words of condemnation once the perpetrator is Israel, by international institutions doing buisness with Israel or corporations that enable Israeli crimes, by Muslims of the world who normalise relations with Israel and buy Israeli dates merged with our pains of loss and dispossession, by Zionist Jews and Christians who support the uninterrupted process of ethnic cleansing against the native people of the ‘promised land’ in the name of God.

The best response to such brutality and normalisation is active solidarity!

We have a beautiful demonstration of solidarity today with thousands uniting from different races, religions, genders, professions and cities, to say: we’re not turning our back to the Palestinian people. We know too well that whether Palestine on news headlines or not, Israel is perpetrating violence uninterruptedly.

Every minute, innocent souls are buried, and building that took a lifetime to build are flattened. It is urgent that people of conscience all over the world join in solidarity and resist the collusion of their governments and institutions in this long-standing crime against humanity.