Towards Our Collective Freedom from White Supremacy & Zionism

In an interview Christiane Amanpour conducted with Houston Police Chief on CNN, Art Acevedo stressed that kindness and solidarity should lead the way during these dark times, not ignorance.

Houston Police Chief @ArtAcevedo: “Let me just say this to the President of the United States, on behalf of the police chiefs of this country: please, if you don’t have something constructive to say, keep your mouth shut.” pic.twitter.com/z5AJpOO0RO

But will Acevedo agree that this kindness must include breaking the chains of complicity empowering racist ideologies from white-supremacy to Zionism? Will he feel the Palestinians’ immense pain and push to end Israeli and US military collaboration for the sake of all people at the receiving end of their brutality? Will he cut ties with the Anti-Defamation League (ADL) and the deadly exchange of military services they manage between the US and our oppressor Israel?

His words will be merely a performance act if this kindness that he advocates for is not translated into meaningful change.

In December 2018, grassroots organising efforts, using Boycott, Divestment and Sanction (BDS) tactics, succeeded in forcing the Vermont State Police, Northampton and Massachusetts police chief to pull out of a police exchange program with Israel, managed by the Anti-Defamation League. This example should be reproduced all over the USA and beyond.

Connecting our struggles for a world revolution

To my black brothers and sisters from Palestine to the USA, your enemy is mine, and my enemy is yours. We must connect our struggles and build meaningful solidarity between us to resist our allied oppressors as a united front.

This means we need to understand each other’s struggles, unlearn imperial thinking that distorted our outlook to the world, connect the dots, and fight this multifaceted common enemy. Zionist systematic erasure of Palestinian natives and US institutionalised racism that targets natives and people of colour communities empower each other. We have to understand that oppression does not exist in a vacuum but is enabled through military, economic and diplomatic collaborations. Breaking this collaboration between them will serve our collective liberation.

Palestinian artist Lina: “no wonder that US police are so brutal in their methods, when they have given & received training from the Israeli Occupation Forces who terrorize Palestinians daily. As Palestinians, we should be 1st to reject all types of oppression.” #BlackLivesMatter pic.twitter.com/c0YMkdhtcC

Any state founded on colonialism, genocidal dispossession of indigenous peoples and slavery is fundamentally insecure. Methods of repression and coercion used against people demanding justice is their expression of their desperation to maintain the status quo. The US repression of #BlackLivesMatter protests and Israel’s systematic oppression of Palestinian resistance is an expression of this fragility that is rooted in their foundational problems.  But it is ultimately down to the people if they submit or resist.

The successful anti-apartheid movement in South Africa teaches us that no oppressors ever voluntarily change. They have to be forced into changing through internal and global resistance. And just like the apartheid regime in South Africa, we need to understand how such supremacist powers do not exist in a vacuum, but are enabled, funded, and normalised by an international apparatus of violence, greed, ignorance and submission. If we unite to break this chain wherever we see it, we will eventually prevail.

Palestinian revolutionary Ghassan Kanafani reminded before Israel killed him in 1972 at the age of 36: “Imperialism has laid its body over the world… Wherever you strike it, you damage it, and you serve the World Revolution.” Kanafani was assassinated together with his 17-year-old niece Lamis. Both could have lived if they weren’t Palestinians.

Remember again, that those same Zionist killers, who dispossessed, imprisoned, killed and maimed Palestinians for 72 years, are the biggest recipients of US military ‘aid’, paid by US taxpayers. They also offer military training to many US police departments, and those techniques that brought about the lynching of George Floyd are widely used against Palestinians in the occupied territories, including children. Many of us stood in utter shock after a video that went viral of Al-Tamimi child being forced into a chokehold by an Israeli solider and fought off by Palestinian children and women.

In fact, at least 100 Minnesota police officers attended a so-called counterterrorism training conference in Chicago and Minneapolis, hosted by the Israeli consulate and the FBI. “There they learned the violent techniques used by Israeli forces as they terrorise the occupied Palestinian territories under the guise of security operations,” Steve Sweeney wrote for the Morning Star. Connect the dots.

From Palestine to Minneapolis, racism is a crime 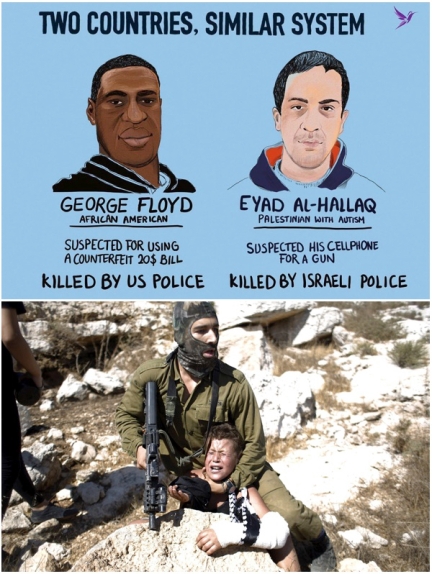 The bottom picture records a Palestinian child from Al-Tamimi Family in chokehold by an Israeli soldier during popular protest at the occupied village of Nabi-Saleh. This was recorded on camera.

Few days after the murder of George Floyd Minneapolis, the Israeli occupation army killed Eyad Hallaq, a 32-year-old autistic Palestinian, near Al-Asbat Gate in occupied Jerusalem’s old city on the morning of 30 May 2020. His disability makes him like a 7 year old child, and he has hearing and speech difficulties. He was on his way to Elwyn school for disabled people. Israeli soldiers saw him holding a ‘suspicious object,’ they thought it was a gun- he held a cellphone. When they ordered Eyad to stop, he started running out of fear, like a child. The penalty was death sentence. Do you know how many times they killed him? 10 times! 10 bullets. Let this sink in.

Still, after the shooting, they declared a state of emergency in the occupied Old City of Jerusalem, looking for a gun of their fantasy and found none. During that time, medics were barred from entering the area as poor Eyad was bleeding to death. Let this too sink in.

If you cried for the pain of many black mothers over losing their children for being black, you should cry for Eyad’s mother.

“What’s his fault? they killed him in cold blood! he’s my only son ..”#Watch | The mother of martyr Eyad Hallaq mourn her son that have been shot dead by Israeli occupation police in occupied Jerusalem!#IsraeliCrimes pic.twitter.com/shYpW6zS5r

Listen to her crying with dignity as she demands: “I want justice for my son from the state of Israel.” But will justice be served? Palestinians The aged wrinkles of her face are emboldened with bitter tears over too many young lives being killed systematically and for no reason, for the mere reason of being Palestinians.

The shocking killing of Eyad Hallaq needs to be seen in the context of how Zionist Israeli forces are historically indoctrinated to treat Palestinian lives and bodies as “disposable.” This is part and parcel of a consistent Zionist policy of keeping as few native Arabs as possible on as minimal land as possible, informing Israeli settler-colonial practices against the Palestinians, since the inception of Zionism and pre-state building until today. If this is not racism, then what is it?

Fighting racism entails the understanding that Zionism is racism, and as siding with the oppressed as well as opposing the genocidal colonisation of indigenous peoples, means standing in solidarity with the Palestinian struggle for liberation.

As Angela Davis said, we need to stop accepting what we cannot change, and change what we cannot accept! She herself offers a great example of solidarity and organising across struggle, and we learn from her history of a trend of Palestinian and Black solidarity that became especially powerful during the Civil Rights Movement.

Angela Davis spoke of the Palestinian captive resistance and solidarity with her during her imprisonment in US jails in the early 1970s and beyond, and that’s why she adopts Palestine as her own struggle. My father who was detained by Israel in January 1972 and sentenced to 7 lifetimes for no crime, was amongst those freedom fighters behind Israeli jails who extended a letter of solidarity to Angela Davis which she remembers to this day and reflects on in her talks and writings.

“Palestinian activists have long supported Black people’s struggle against racism. When I was in jail, solidarity coming from Palestine was a major source of courage for me. There has been this very important connection between the two struggles for many decades”
Dr Angela Davis pic.twitter.com/TGK1fs84bm