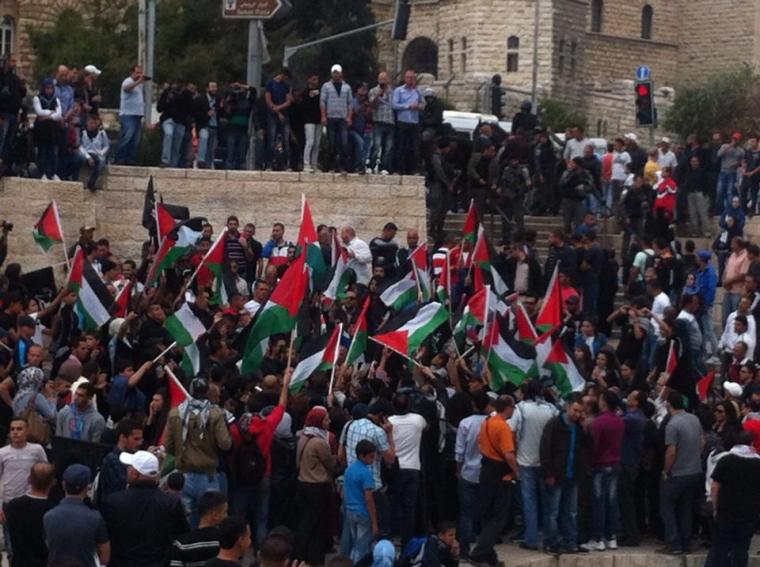 Feeling proud! Feeling high! Our defiant people in Jerusalem lifted my spirit which had been bruised through these last few weeks by the continuous entrapment in the besieged Gaza Strip, unable to leave for my graduation studies. I cannot put into words how proud I feel of our people in Jerusalem.

On Wednesday night, I had a long and exciting chat with my friend Amjad Abu Asab in Jerusalem who makes me feel very connected to Jerusalem, as if I am there amidst the bustle and lights of the old city’s streets. He described to me what happened and didn’t miss a single detail. Thanks to him, I could picture my dear city Jerusalem, Al-Amoud gate, the clashes and the demonstrations that happened there, the atmosphere, the anger, the smell, everything.

Amjad was one of the demonstrators who gathered at Al-Amoud gate in the old city. When I called him to ask about the situation in Jerusalem, I expected his voice to be filled with frustration and anger. His positive reply inspired me. “We managed to send a powerful message of rejection and defiance to the Israeli Occupation and the radical Jewish settlers who repeatedly break into Al-Aqsa mosque. The message that Jerusalem is Arab and Palestinian and we won’t be easily defeated.”

It does make me angry to know that our people go through such brutality on a daily basis, and that we can only support them behind the fences and walls as our physical presence is impossible under the Israeli apartheid regime. But it makes me very proud because our people are still determined and defiant.  They pay a huge price for living in Jerusalem which is subjected to systematic ethnic cleansing policies but they pay the price happily because they know that “to love a land is to live and die for it.”

Amjad was one the people who was attacked by the Israeli soldiers. But that couldn’t depress him and he still told me the story with a positive tone. “I was beaten up with batons today,” he said with laughter.

I asked him how all these clashes started. “Many people gathered at Al-Amoud gate to rebel against the repetitive provocative raids of Al-Aqsa. Some radical settlers broke into the demonstration with two Israeli flags and kept waiving them amongst the angry protesters,” he replied. “There was a Palestinian salesman who sells shoes on a little table at Al-Amoud gate. One woman grabbed a shoe and threw it at that radical settler in response to his insulting provocations, and then all of a sudden all the protesters started showering shoes collectively at the soldiers.” The excitement and pride that I could feel in his voice as he narrated the story to me made me burst into laughter.

When our Palestinian people in Jerusalem threw shoes at the faces of the Israeli soldiers and radical settlers, they were attacked with tear gas bombs and batons.  You cannot compare our people’s harmless shoes to the murderous weapons the Israeli forces used to suppress our people. But our people’s faith in our just cause empowers them with strength, poise and determination to stand firm in the face of Israel’s brutality and to keep resisting.

“A tear gas cannister hit my friend’s head and he was sent to hospital. He was rescued miraculously because the bomb hit the wall before it hit his head. Otherwise he could have been martyred,” Amjad said. Amjad’s friend was sent to hospital, but was thankfully released after a few hours. His situation is stable.

About 40 other Palestinians were injured in these clashes including three women, some paramedics and journalists. 15 people were jailed including three children, Ahmad Khanfar 14, Omar Al-Sheilk Ahmad 15 and Omar Abu Sarriya 14. Our Palestinian brethren in Jerusalem were terrorized, wounded and detained in the name of maintaining security and protection for the Zionist colonial settlers.

The Israeli Occupation Forces were savage and aggressive but they failed to make our people surrender. Israel’s brutality inspires our determination to keep up the fight. Every time they tried violently to disperse the crowd, they gathered again in different locations. The Israeli soldiers kept chasing them wherever they went.

Keep an eye on Jerusalem. Our people in Jerusalem face such challenges and risks on a daily basis. These vicious practices by the Israeli Occupation Forces have only one goal: to continue the systematic ethnic cleansing of our people.

At this very moment, passing through Rafah border crossing and travelling abroad for my MA studies in Turkey is no longer what I wish I could do. I don’t wish for anything more than for me to be in Jerusalem! This post is dedicated to my friends and strong people in Jerusalem. I would like them to know that we feel for you. Even if Israel builds a thousand more checkpoints to divide our people, we will stay united and feel for each other’s suffering. Keep your chins up you fighters of Jerusalem! They will not manage to Judaise our Arab Palestinian Jerusalem or our holy Palestinian soil. Free Palestine from the river to the sea!