A year after Gaza attack, the world must stop supporting Israel’s crimes 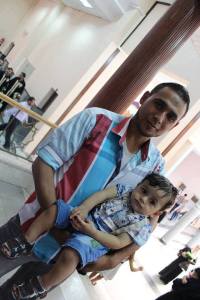 I can almost hear my dad’s voice breaking in tears echoing in my ears when I called him on August 13th 2014 following the murder of our neighbour Hazem Abu-Murad who grew up next door to our home and was like a son for my Dad and his best companion whenever he sat at the front door of our home. Along with five others, Hazem was killed while trying to diffuse an unexploded 500-kilogram Israeli missile in Beit-Lahya. I can still recall the unspeakable shock that my family suffered on the first day of Al-Fitir Eid over the loss of my uncle Mohammed Abu-Louz who was killed leaving behind a very young widow with a 2-year old son and 3-year-old daughter who were too young to comprehend what was going around them and were dressed with new Eid clothes and constantly asking when their father would be back to give them candies and gifts.

I can almost hear my mum’s shaky voice on the phone saying whenever I called, “We’re okay, thank God. Don’t worry.” Continuous bombing rumbled in the background, almost every second. Sometimes, right after I heard the terrifying sounds of explosions, the call disconnected. That would drive me mad as dark thoughts, all about death, destruction and loss, filled my mind. I would try endlessly to call back as panic overcame me. Only when I heard their voices again could I calm down and breathe, or at least sigh as attempts to keep myself together failed. During those traumatizing times, sleep was the last thing on my mind. If I slept, I dozed unintentionally on my computer or my sofa. But I woke from these accidental naps terrified, almost out of breath, thinking that anything could have happened while I slept. I would run to call my family, and could only relax once someone answered the phone. I would break into tears that were a mixture of conflicting emotions: fear, trauma and happiness. Their voices on the phone indicated they were still alive, or not dead yet.

These fears filled me for 51 days and nights, but intensified more as the war grew crazier, more brutal, then beyond brutal. My days and nights merged so I no longer kept track of time. It became meaningless. Food lost its taste. Even rest, though I was exhausted, became undesirable. I spent 51 days in isolation, sitting in front of my computer and phone, watching Al-Mayadeen coverage, and at the same time listening to Palestinian radio channels like Al-Quds, Al-Aqsa and Al-Sha’b online. To keep my sanity, I wrote on social media, sometimes filling my sketchbook with black and white, or marching through Istanbul’s streets with a group of Palestinians to express our anger. We chanted as loudly as we could for justice and holding Israel accountable for its crimes, for stopping the attack on Gaza and the bloodshed. Looking outside my window in Istanbul used to feel like a slap in the face as I saw typical, ordinary days, as if nothing was happening in Palestine and no one was dying almost every moment.

At times, I felt that even though I was privileged to study outside the Gaza ghetto, where the lives of everyone, regardless of age of gender, were threatened by the Zionist murder machine, it was harder to bear than the times I was there, experiencing attacks first hand. But I think that was because I had been there when death was everywhere and bombings surrounded us. I knew what it was like, and that was what made me go mad. We had survived many attacks, but that did not mean we would survive all of them.

The last Gaza massacre was beyond brutal. The Israeli occupation crossed all red lines with its immoral and inhumane measures. Neighborhoods were completely destroyed. Families were wiped out, with not even one member surviving to pass on the stories and ambitions of those who were murdered. But the international mainstream media had reduced this devastating cost that the Palestinian people endured into numbers in its headlines or even between the lines.

A year has passed since the ceasefire was declared after 2,200 Palestinians, most of them civilians, died in front of the whole world as Western powers parroted their commitment to Israel’s right to self-defense. Meanwhile the death toll rose higher and higher. Self-defense against whom? Numbers themselves tell the whole story clearly. 2,200 Palestinians, most of them civilians, a third children, were killed in Gaza, and more than 100,000 buildings totally destroyed, while 73 Israelis, nearly all soldiers, died. This is an occupation against the occupied, not equal armies fighting a ‘conflict.’ Ours are people calling for their legitimate rights, rejecting brutal living conditions that resemble a slow death sentence under a suffocating siege, and resisting oppression that has lasted 67 years by a colonial power that treats them as less than human and continues to deny their most basic rights while attacking their very existence, identity, culture and history.

A year has passed and the piles of rubble remain as cruel reminders of all our people endured during the 51-day onslaught, its devastating aftermath and how little progress has been made since then. Reconstruction has barely begun. Thousands still live in makeshift shelters, leading a life of uncertainty and struggling daily for survival. I am sure every Palestinian, especially those from Gaza, is still traumatized. What we survived during the summer of 2014 will take a lifetime to heal. It will always remain like a scar on our psyche until justice for the victims who died is achieved, and the freedom for which we paid this huge price is gained, until Israel is held accountable, denaturalized and treated for what it is in reality: a settler-colonial state.

But not only Israel is responsible for what our people have endured. It is a responsibility shared by the whole international community, who give Israel a green light to cross all red lines. Israel’s impunity is fortified by a world that not only watches silently, but is proactive in its unconditional support for Israel’s crimes. International solidarity with Palestine has to move beyond mere sentiment to serious political actions that fight the policies of governments who support Israel and all it does.

Do not allow your governments to continue their support of Israel in your name! Have your say! Boycott, Divestment and Sanctions (BDS) is a tactic that is growing all over the world and effectively threatening Israel. Empower it more wherever you are and help spread the voice of justice. And always remember that “injustice anywhere is a threat to justice everywhere.”

This entry was posted on July 10, 2015 by Shahd Abusalama. It was filed under Reflections and memories and was tagged with #GazaUnderAttack, BDS, Gaza Attack, Gaza War, Israel, Palestine.