Words fail me. There are no words that can do justice to the martyrs that fall every day, the pain that intensifies in our hearts, the floods of tears from the oppressed. Words lose their strength for a Palestinian people who face a daily stuggle to survive under a brutal occupation that doesn’t recognize their most basic human rights.

What is more painful and disappointing is that our supposed “leadership” is complicit in these ongoing crimes and shamelessly provides the first line of impunity and defense for the Israeli occupation to continue attacking and terrorizing us. Very aware of how the situation is deteriorating to an intolerable extent, the leadership stays committed to meaningless negotiations that bring no justice to us or to our martyrs. Israel has killed forty Palestinians since the beginning of US-backed negotiations between the Palestinian Authority and Israel.

Before our people go to sleep each night, we always hope for a brighter morning with more security, freedom and justice. But everyday we wake up to witness more darkness, more brutality and more violations of our rights.

On the morning of 27 February, we woke up to the news of an Israeli military raid on the central West Bank village of Birzeit, near Ramallah. The village lies very close to the Muqataa compound, where the Palestinian Authority lives with a delusion of having authority, guarded by an “army” unable to provide any sense of security to its people.

The Israeli forces besieged a house belongs to Washaha family, forcibly evacuated its residents and those of neighboring houses, destroyed parts of it and set the rest on fire.

Even more cruelly, the military kept its people watching as their belongings and memories burned and as Muataz Washaha, who was active in the Popular Front for the Liberation of Palestine, was attacked.

The Israeli occupation forces had stormed the Washaha family’s house, looking for Muataz. They assaulted members of the Washaha family and detained his brother, Ramiz, as well as his friends Fadi Sedqi and Samir al-Qaisi.

A few months passed since 24-year-old Muataz Washaha was released from an Israeli jail. He knew very well what being imprisoned meant for he refused to surrender to the Israeli military. He prefered to barricade himself in a corner of his house and resist arrest. He chose to die within his home, where he had spent his childhood and youth.

“I will be free here. Leave and do not worry about me. I will stay here and not surrender. I will not return to prison.” These were the last words Muataz Washaha uttered to a civil defense worker, who was the last person to have access to him before the house was evacuated of everyone else.

The civil defense man had no choice than to kiss Muataz’s forehead and leave, respecting his wish.

Soon afterwards, the Israeli military located Muataz with its sophisticated technology and started shooting live bullets and shells at him. He was called on to turn himself in but Muataz would not. This unequal confrontation lasted for six hours, which were enough to kill Muataz a thousand times.

After the withdrawal of the Israeli forces,  Muataz’s body was found torn by tens of live bullets. His head had been hit by a rifle-fired Energa shell.

According to the Israeli military, Muataz Washaha was killed because he was “suspected of terror activity.” How ridiculous to read such a statement.

After the countless acts of terror the occupation forces have committed against the Palestinian people, they should be the last ones to speak about terror or define what terror is. 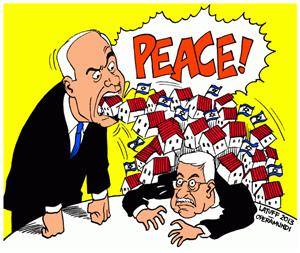 Isn’t it the time for Mahmoud Abbas to be ashamed of himself for his commitment to the “security” of Israel and his declarations that it is “the utmost important challenge that the Palestinian security forces are dealing with”?

Why is the “peace process” continuing, when it is very obvious that Israel is not interested in peace?

The systematic ethnic cleansing process continues against our people in Jerusalem and settlements continue to expand as more “peace” talks take place. It is time for the PA to turn to the Palestinian people and stop compromising our rights.

The PA has to understand that our fight is about liberation and justice, not about a state and a flag, luxurious embassies all over the world, a few privileges or a travel document. Back in 1993, Edward Said wrote: “We should remind ourselves that much more important than having a state is the kind of state it is.”

Said insisted that “no negotiations are better than endless concessions that simply prolong Israeli occupation.”

Sadly, this is what we see happening on ground. More negotiations lead to more concessions.