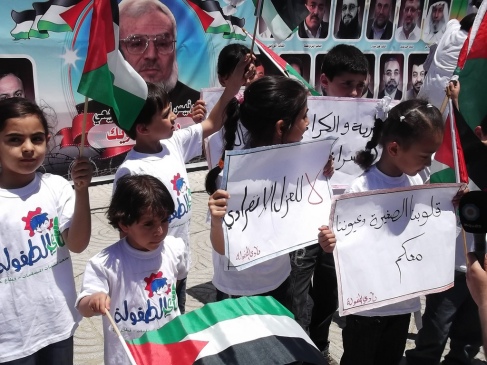 Kindergarten kids carry signs reading, “No to solitary confinement”, “Freedom and dignity for Palestinian political prisoners”, “Our little heart and minds are with you”– by Joe Catron

This morning was very eventful one in the Gaza sit-in tent. As I arrived around 10:00 am, more than a hundred kids, each about four years old, entered the tent. They looked very beautiful and innocent. They came from Gassan Kanafani’s kindergarten carrying signs like “I want to hug Dad,” “I want Dad to be free,” or “Freedom for Palestinian political prisoners.”

They didn’t fully understand why they were there, but their participation put smiles on the faces of the hunger strikers and the detainees’ families, who joined their soft voices while chanting along with them: “Free, free Palestine!” All generations united their voices to call for the victory of our political prisoners’ battle of dignity, which continues for the 23rd day. 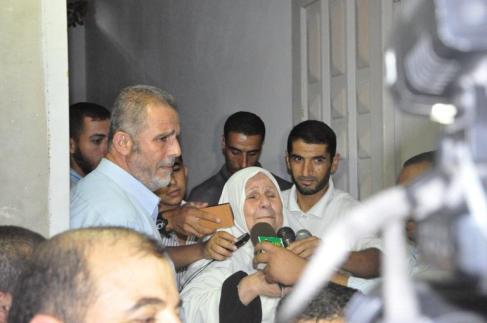 Soon after that, a 75-year-old woman entered the sit-in tent in a wheelchair, surrounded by a crowd of photographers and other people. I wondered who she was, then discovered that she was Hassan Salama’s mother. Despite her age and her medical condition, she insisted on visiting the tent to show solidarity with her son, who has been in solitary confinement for 13 years. She gave a revolutionary, emotional speech that inspired many listeners and made them cry, especially when she said, “My son is my sacrifice to Palestine.” She and all detainees’ mothers are symbols of the resistance.

We consider solitary confinement one of the most horrible crimes and among the most difficult punishments inflicted on our brave detainees by the Israeli Prison Service. Its main goal is to destroy the prisoner’s mind and devastate his psychological and physical health as quickly as possible. Ending this unjust policy is one of the most important demands our prisoners aim to achieve from this strike, as it constitutes a grave violation of their rights to personal liberty, bodily integrity, and dignity.

After that, hundreds of Palestinians marched in solidarity with the2002 deportees from the Church of Nativity in Bethlehem. May 10 marks the eleventh anniversary of their exile. They were promised that they would be allowed to return after two or three years of deportation, after 11 years, they’re still refugees in the Gaza Strip. Deportation is a terrible violation of Geneva Convention IV and a form of ethnic cleansing that Israel continues to use against Palestinian people. Recently, administrative detainee Hana’ Shalabi was deported to Gaza and promised she could return to Jenin after 3 years of exile, but who knows if she’ll ever be allowed back or forced into exile forever?

This entry was posted on May 9, 2012 by Shahd Abusalama. It was filed under Palestinian Political Prisoners and was tagged with Gaza, Hassan Salameh, Hunger Strike, Palestine, Political prisoners, solitary confinement.