When I was a very young girl, I used to climb the window and stretch my arm out, trying to collect some rain in my small hand, then sip it, believing that it was the purest ever. I remembered this as I was listening to the raindrops hitting my room’s windows, which I made sure were securely closed, to keep the cold wind from blowing inside and disturbing the warmth my body felt under my heavy blankets.

Meanwhile, I could hear mum talking quietly from the room just next door, but couldn’t recognize exactly what she was saying. She suddenly paused and called me to join her and seize the chance to pray, as in Islam it’s said that prayers are more likely to come true while rain is falling. I closed my eyes as tight as I could and listened to her sincere prayers for us to accomplish all that we dream, for all sick and injured people to recover soon, for all dead to reach heaven, and for Palestine, from the sea to the river, to be free. As I could only hear mum’s voice along with the raindrops, a harmonic atmosphere spread around me, and my lips moved in silence, “Amen”.

Being a Muslim, I never celebrated Christmas myself, but having lots of Christian friends inside and outside Palestine has connected me to this day. I’ve always shared it with them one way or another, since I believe that religion shouldn’t stand as a barrier between human beings. Religion is to call for love, compassion, and tolerance. It should unite people, not divide them. Sadly, not all that is said is done. Three years ago, people around the world welcomed Christmas and the New Year happily with lights, colorful balloons and fireworks while Gaza received it with white phosphorous lighting the dark sky and rivers of bloods spilled by the Israeli Occupation Forces.

Even though I am Muslim, I’ve always appreciated the beauty of Christmas trees, lights, gatherings, 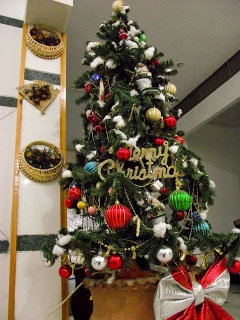 meals and religious songs that I see Christians perform in the Christmas movies I watched. On this rainy and windy day, which I knew was Christmas, I wished that Gaza’s sky would snow so that it would be a typical Christmas day like movies made me picture. For an observer like me, snow adds a factor of beauty to Christmas celebrations, even though my Christians friends abroad would sometimes complain about it.  I don’t blame them, though, as I have never seen any snow and never experienced its negative side.

I spent this Christmas Eve with Lydia and Joe, two of our Christian friends who came to Gaza in solidarity with Palestine, and in support of Palestinian people who live under the Israeli Occupation. My family and I didn’t hesitate to bring Christmas gifts and share this special day with them, as a form of appreciation for their indescribable humanity as they chose to celebrate it in the besieged Gaza Strip rather than joining their families on such a holy occasion.

Approximately three thousand people among Gaza’s population are Christians. Recently, I made new friends among them, a Christian family that I met through a funny coincidence. A couple of months ago, I was walking with my Greek friend Mack, who came to Gaza as a solidarity activist, and we passed a dress shop named Kopella. The name attracted Mack’s eyes, as it happened to be a Greek word for a young lady. He dragged me inside the shop, which we learned was owned by a Christian family named Alsalfiti. He was very curious to know if they knew what the word means, and it turned that they have a daughter studying in Greece, who chose this name for their shop.

Around a week ago, I visited the Al-Salfiti family with Joe and Lydia, who were interested to know how Christians in Gaza celebrate Christmas. The first thing my eyes glimpsed was a beautifully decorated plastic tree that was placed in the corner of their house to welcome Christmas. “I brought this from Bethlehem five years ago,” Lili, the mother, told me while pointing at the tree after she noticed my surprise.

“We used to get permits from the Israeli Occupation to Bethlehem every Christmas, to celebrate it in the Church of Nativity with our relatives who live there,” Abu Wade’ the father, said.  “But that can no longer happen.  After Shalit was captured by the resistance, people from 16 to 35 weren’t allowed to go. So my kids haven’t been able to join us in Bethlehem for more than five years. Many people are denied permission for the reasons of security, but no one knows what the security reasons are. For example, my wife and I applied a little while ago. She got permission, but I didn’t.”

Lili interrupted with a frustrated voice, saying, “Only a range of three to five hundred Christians get permission.”

Abu Wade’ raised his voice: “Remember, no Muslim is allowed by the Israeli Occupation to pray in Al Aqsa, either on their religious holidays or any other days.”

While talking about Bethlehem, I recalled precious memories stuck in mind since I was nine y 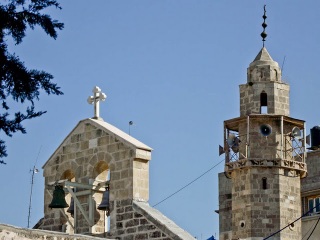 ears old, just before the Second Intifada started. Mum struggled to get permission from the Israeli Occupation to take me and my two elder siblings on a trip to the West Bank. She eventually did, and so we went. I recall the few hours I had inside the Church of Nativity, and how strongly spiritual it felt to be where the Christ was born. I remember how my eyes were captured by the beauty of the place and its architecture that is enriched with history. Once I recalled these memories with Mum, and she laughed at me, remembering how surprised I was to see people crying very hard. When I asked her about it innocently, she replied, “Christians cry while praying out of reverence, just like Muslims do.”

It is very painful to think of how close I am to the West Bank, but how far the Israeli Occupation makes it seem at the same time. If I were to ask Santa Claus for something that would come true, I would wish that I could step on every grain of sand in our historical Palestine, freely visit Jerusalem to pray in Al-Aqsa Mosque and enjoy the smell of its air and its charming, mountainous nature, and visit Bethlehem and the Church of the Nativity. There are many beautiful, breathtaking scenes that I would love to draw as I see them in reality. I have faith that I will someday, once Palestine is free.

This entry was posted on December 26, 2011 by Shahd Abusalama. It was filed under Life in Gaza and was tagged with Christians, Christmas, Israel, Palestine.