My Journey to America

After all the difficulties I had been through in order to get myself out of the big prison of the Gaza Strip, I made it to USA.

I spent the first week of the program in Gaza against my will. My hope of leaving had gradually been fading until I received a call informing me that I would be leaving through Erez on the 26th of June after a whole week of pain trying to pass Rafah border. I was in Gaza physically but not mentally. My mind was constantly with the people who would become my second family soon after my arrival. I was daydreaming of life in USA and I couldn’t wait till I arrived there. I thought I was so unlucky that I missed a week in my life there but in fact I was such a lucky girl. What had been waiting for me was beyond my expectations.

At 8 am, on the 26th of June, my adventure had started. I had passed through Erez and Jerusalem, and somehow I was able to convince my driver to take me by the old city. I wasn’t allowed to leave the bus till I arrived Allenby Bridge in Jericho, but my driver had sympathy for me and he allowed me to have one hour there even though he took a risk by doing that. I actually exceeded the limited time I had as walking in the old streets of Jerusalem and visiting all the holy sites, the Dome of the Rock and Al-Aqsa Mosque, stole my mind. I was jumping in the streets and singing out loudly like a nut. Can’t blame me for that! I had to go back to where we agreed to meet in order to get dropped off by Allenby to complete my way to Amman, while wondering why it must be so difficult for me to go to my capital city and why I have to go through all these complex procedures in order to travel.

I had arrived in Amman by 6 pm and had stayed with a very nice woman whom I knew through Facebook as she was supporting the sales of my calendar, Gaza Calendar 2011. I spent a short but unforgettable time in Amman. My plane was scheduled to leave at 5 pm on the following day. I had to travel to Dubai’s airport and then to Washington DC.

I couldn’t believe myself when I took my first step out of the plain in Washington DC airport after a 12-hours-non-stop flight. I was even more excited knowing that only a couple of hours separated me from joining the MEPI family. But I should learn that excitement sometimes works in the wrong direction. I was walking the airport with a look full of excitement, smiling to everyone I encountered, and ended up sitting in a gate that I thought it was the right one, but realized had been the wrong one two minutes after my flight to Philadelphia took off. It was actually kind of funny. I didn’t know how it had happened, but I guess for someone who had taken a 12-hour non-stop flight, sitting between two elderly people who kept snoring the whole trip, it is normal to run out of batteries. My flight was rescheduled for me. It was by then a bit sad as almost nothing remained to meet my MEPI family, but it turned out to require four more hours of waiting. Then I cried like a baby until I fell asleep, only to wake up just as my flight started boarding and return to the same excitement I had before.

“Nothing happens without a reason” – this is something that I started to believe in very deeply. I met wonderful people on that flight that left an impact on my vision for my future. Some of those people belonged to a church group who were volunteering in Zambia fighting hunger and poverty there. By the end of the trip, it felt as if I was one of them. They didn’t leave me tell they made sure that I got my luggage and everything was ok with me. Soon after, they formed themselves as a circle and held each other’s hands and included me. Then they made a prayer with their eyes closed to give thanks for their safe arrival. I am Muslim but I joined them while they were doing their prayer and it felt good to me. I believe that religions shouldn’t create gaps between people. To whatever religion we belong, we are all humans at the end of the day and what we share is more than how we differ from one another.

As I was walking toward the exit expecting to see somebody to drive me to Newark, Delaware, I saw the coordinator of MEPI program in the University of Delaware, waiting for me and holding a paper with my name written on it. After glancing at him, I ran to him and I hugged him as if I knew him already. I was just so excited about starting my journey. He drove me to Delaware where my MEPI family was waiting for me excitedly. 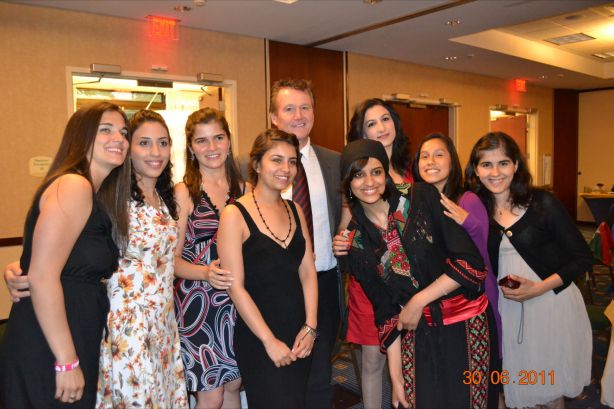 Meeting my MEPI family was so special to me. Thinking of them constantly before the time came and following their Facebook posts from Gaza made them already a part of me, even before I met any of them. That made it easier for us to get along. We were together all the time. We used to leave each other at bedtime, only to dream about the next day. Every day made us more connected and more caring about each other. I felt a real family overwhelmed with love, passion, and care around me. We would laugh together and cry if anyone started to shed a tear. They maybe didn’t know to what extent each one of them affected my personality, but at least I know that they will keep their own place in my heart forever. My colleagues were from 14 different countries of the Middle East and North Africa. We had many differences but those differences didn’t keep us apart, they only made our family more interesting. We had fun laughing at each other’s accents and sharing our cultures. The loveliest part was the staff members. They are such great people who accompanied us all the time to make sure that every day would be better than the previous day. They were there to educate us, to help us doing our homework, and to cheer us up whenever we felt down. They dedicated themselves to supporting us in every way they could. Such giving and loving people are rare to find. They have left an enduring impression on me. I feel so proud having had a chance to be close to such wonderful people with amazing characters.

The real wealth is not measured with money but with how many close relationships you form. Therefore, I consider myself to be very rich as I have many real friends that I can trust for the rest of my life.

Apart from making friends, for a Gazan, who got used to seeing gray all around and not much green, it is delightful to see some views of nature. This is another thing I loved about America. I never got bored wandering around in the streets as the huge trees with fireflies that seemed like Christmas tree lights made me full of joy and inspiration. I would go for a walk ifI felt rough, but that was never a way for me to relax in Gaza. I never minded long drives, too. My head would keep swinging from one window to another in order not to miss any views. We would pass by huge lakes that took my breath away, or a group of geese, or sometimes we would see deer standing by the woods.

I felt so fortunate had having a chance to let my eyes enjoy pondering nature there and meeting many interesting people, some of them were great professors who are so passionate about the Palestinian cause. They became excited about setting up a meeting with me as soon as they know I am a Palestinian living in Gaza.

I also enjoyed talking to people that I encountered by chance. Palestine was my favorite topic to talk about whenever I had a chance. It was funny as most times I spoke to anyone, she or he would ask me where I am from, and then I would reply with a smile on my face, “I’m from Palestine.” Then most people would ask, “Pakistan?” and I would say again, “no! PaLLLLestine” to make sure that I make the pronunciation of letter “L” as clear as possible. But this actually didn’t make any difference to some of them, as they would either ask “where is that?” or “what’s that?” My answer would be “Do you know Israel?” They would show all the expressions of confirmation they can and then I would say “well, Israel is in Palestine” to leave them with exclamation marks on their faces. And then they would be confused, which would be the responsibility that I enjoyed the most, to explain what I meant with history as my only evidence.

It was a bit sad that many people didn’t recognize my country. I say MY COUNTRY as I’ll never lose hope that it is going to be a country one day. Sometimes I got emotional seeing maps with Israel written in bold on the world map and not finding Palestine in the resources that were given to us for use during the leadership program. However, that only grew two things inside me: Knowledge of how hard I have to work to educate people about my country, and determination to make Palestine recognized by every human being on the planet.

Writing about my journey to USA can never end. Briefly and honestly, the five weeks I spent there made me much more mature and confident in my potential, and my ability to give as much as to take. I’m not such a different Shahd, but I can assure you I am a better Shahd after this interesting, eventful, and educational journey.

This entry was posted on August 21, 2011 by Shahd Abusalama. It was filed under Reflections and memories and was tagged with America, Gaza, Gaza siege, Israel, Israeli Occupation, MEPI, USA.